Kobe Bryant issued a challenge to new Cleveland Cavaliers’ acquisition Isaiah Thomas, daring him to make the First Team All-NBA next season over an Instagram post on his birthday.

Yet this challenge to Thomas can be a daunting one, as the 5-foot-9 whirling dervish would need to outlast the likes of Russell Westbrook, Kyrie Irving, Stephen Curry, John Wall, Chris Paul, and other elite talents at the point guard position to hold that very honor.

The difficulty of the challenge is perhaps what makes it such a fitting one for something issued by Bryant himself, who has demanded nothing but excellence for himself and others throughout his career.

Thomas cracked the Second Team All-NBA last season after becoming the third-best scorer in the league with a 28.9 points per game average and made his first All-Star appearance, leading the Boston Celtics to a No. 1 seed in the Eastern Conference.

His new team should help him bolster his efficiency on the court, coming off a career-best season shooting a .463/.379/.909 line during the regular season. 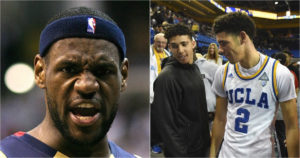