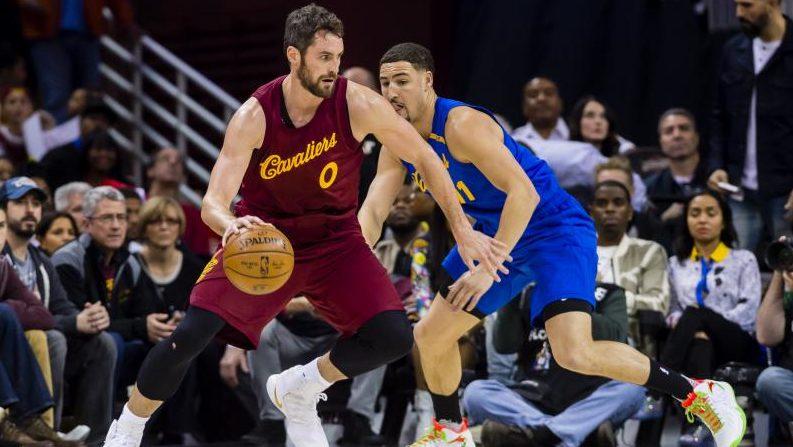 Prior to the start of the 2017-18 season, the NBA made some major alterations to the All-Star Game format by changing it to a draft layout for choosing both teams.

This has put in play many possibilities for players from both conferences being on the same team that would not have been able to under the previous format. With that in mind, Golden State Warriors guard Klay Thompson stated that he wants to play alongside Cleveland Cavaliers forward Kevin Love at the 2018 All-Star Game in Los Angeles at Staples Center, according to Melissa Rohlin of the Bay Area News Group.

“I think it would be cool to play with  Kevin Love because I grew up with that guy since I was eight years old,” Thompson said during the NBA global media conference on Thursday.

Thompson said that he and Love, who plays for the Cleveland Cavaliers, haven’t played together since they were children, both on the same Little League team in Lake Oswego, Oregon.

“To play with him in the All-Star team would be pretty special,” Thompson said.

This would mark the first time that Love and Thompson had played with each other on the same team at any point in their professional careers. They certainly have plenty of experience playing against one another over the last three NBA Finals.

There is a strong possibility that both could wind up on the same team in the All-Star game with the teams being chosen by designated captains from the selected players to play in the contest. It would be quite interesting to see how both Love and Thompson play off each other in that format.

Ultimately, it’s one of the many possibilities that could play out come next February in Los Angeles in what should be another entertaining All-Star Game