Khloe Kardashian was in attendance to watch Tristan Thompson and the rest of the Cleveland Cavaliers beat the Boston Celtics in Game 4. Apparently, all the fans weren’t there to just watch the game though, and Khloe roasted one for it.

Instagram user m_jizzle posted a selfie, with Khloe sitting a few rows back on Instagram with the caption “issa Kardashian curse.”

Khloe found the post and roasted the guy calling him out for exactly what he had done.

“Corny Ass! You went to a playoff game but were on your phone for almost all of the 4 quarters, Thirsty as f**k, trying to get a picture of me. Dude…Watch the game! We were all talking about how crazy you looked at  game acting like that.”

It seems like after a really rough patch in their relationship, Khloe and Tristan are close to moving on from the cheating episode that almost ended it for the couple.

According to People Magazine, the couple is actually in a much better position, and their relationship is getting better and better every day.

Khloe would like to get married at some point, and although she and Thompson haven’t talked about taking that next step since the cheating allegations, it looks like they could be headed back down that path at some point.

As Khloe and Tristan are happy being back together, it still does appear that some of the Kardashian family aren’t happy with Khloe’s decision though, and wants them to break up. 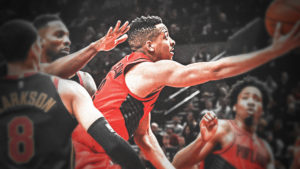 JUST IN: C.J. McCollum says Cleveland is one of the worst defensive teams he’s played against
Related TopicsCavaliersKhloe KardashianTristan Thompson