Cavs rookie Kevin Porter Jr. will be sidelined four to six weeks due to the knee injury he sustained in Sunday night’s game against the Minnesota Timberwolves, according to a report from Kelsey Russo of The Athletic.

Porter went down in obvious pain during the third quarter of the Cavs’ Sunday game against the Timberwolves. While dribbling around a screen at the top of the key, Wolves forward Robert Covington stepped on Porter’s foot as he was trying to make a move in the opposite direction. Porter grabbed his knee in pain as it buckled. Cavs trainer Steve Spiro later helped the former USC standout to the locker room. He logged 19 minutes, scoring six points and five rebounds.

MRI scans that were taken that night revealed a sprained left knee, and the Cavs said that Porter would be re-evaluated in two weeks. Now, however, the re-evaluation mark has been pushed back to 4-6 weeks. Either way, Cleveland will take a cautious approach to his recovery.

With Porter ruled out for a while, players like Cedi Osman, Brandon Knight and Dante Exum will likely see an uptick in their usage rates. Alfonzo McKinnie, who signed a 10-day contract on Thursday, could see some playing time as well.

The Cavs will kick off a six-game road trip on Thursday night with a matchup against the Pistons. Tip-off inside Little Caesars Arena is set for 7:00 p.m. ET. 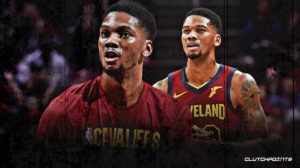