Cleveland Cavaliers second-year swingman Kevin Porter Jr. has been accused of punching a woman in a skirmish involving his sister back in August. The Cavs youngster and his sister reportedly got into a testy verbal argument that resulted in the former USC star allegedly putting hands on a 19-year-old girl, per TMZ.

Porter’s sister reportedly “exchanged words” with one of the other women at an apartment complex in Downtown Cleveland, and the situation then escalated.

Porter’s sister allegedly struck one of the women, which is when the Cavs swingman allegedly jumped in and went after the other woman, a 19-year-old.

Cops were called to the scene, where the 19-year-old told police Porter ripped out her weave and punched her in the left side of her face. According to the police report, a witness told cops Porter’s punch knocked the woman into a refrigerator

Neither Porter nor his sister have been charged as of yet. Meanwhile, Porter’s attorney, Alex Spiro, issued a statement saying the allegations against his client were fabricated, hence the absence of charges.

This adds to a rough week for Porter. The 20-year-old was arrested Sunday on a gun charge after police were called to the scene of a crash in Ohio. Porter put in a plea of not guilty to the misdemeanor charges and did not enter a plea on the felony charge.

Porter was one of the bright spots for the Cavs this past season. He averaged 10.0 points, 3.2 rebounds and 2.2 assists and became more efficient from the perimeter as the year progressed. The former USC star looks like a building block for Cleveland, but his future might be in question given the latest string of events. 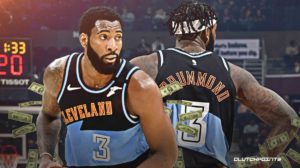