Cleveland Cavaliers All-Star power forward Kevin Love thought he was going to die after having a panic attack in 2017 when the Cavs were facing the Atlanta Hawks.

Love wrote a powerful piece for the Players’ Tribune where he talked about his struggle with mental health. The Cavs star has now become the face of mental health in the NBA. DeMar DeRozan, Steven Adams and Kelly Oubre Jr. are some of the other players who have come out and said they have dealt with mental health issues.

“I had never experienced anything like that before. I thought I was having cardiac arrest or I was having a heart attack and I was going to die,” Love recalled to the Yahoo News show Dear Men.

“It was just one of those things where I couldn’t catch my breath, my heart was pounding, I couldn’t get it to stop.”

Love is a hero to a lot of people. When people saw an NBA superstar like Love come out and talk about his mental health issues, it started a positive discussion about the topic. No matter how much money you make or how successful you are, no one is immune to mental health issues.

Love played in 22 games this season for the Cavs. He averaged 17.0 points and 10.9 rebounds while shooting 38.5 percent from the field and 36.1 percent from beyond the arc. 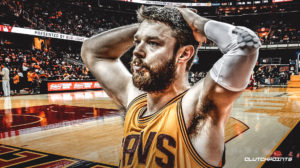