Cavs veteran forward Kevin Love is getting closer to his return from a calf injury that has plagued him for over a month.

The team announced Love, who last played on Dec. 27, has been cleared to resume individual basketball activities after undergoing treatment to heal his right calf strain.

STATUS UPDATE: forward Kevin Love has begun individual basketball activities after undergoing a series of treatment and rehabilitation programs to heal a right calf strain he reaggravated on Dec. 27 against Philadelphia at Rocket Mortgage FieldHouse.

Love played in just two games for the Cavs prior to hitting the shelf. He scored 15 points and chipped in nine rebounds and three assists in a Dec. 26 win over the Detroit Pistons, then played just over eight minutes the following night against the Philadelphia 76ers before leaving with the calf issue.

The Cavs have managed to hold steady in Love’s absence. Cleveland (10-11) is currently seventh in the Eastern Conference, thanks mostly due to a defense that ranks seventh in the NBA in defensive rating.

J.B. Bickerstaff’s team ranks 29th in both scoring and offensive rating, and turnovers have been an issue. Spacing has also been a big issue.

The Cavs rank 29th in three-pointers attempted and dead-last in threes made. This despite strong perimeter showings from the backcourt of Collin Sexton and Darius Garland as well as a surprising 38.7 percent clip from Larry Nance.

Love’s eventual return should go a long way in helping Cleveland’s spacing. His ability to shoot the three complements both Andre Drummond and Jarrett Allen, and he should be an ideal pick-and-pop partner for Garland and Sexton. Love is also one of the better passing bigs in basketball.

It remains to be what the future holds for Love (among others) with the Cavs still in something of a rebuild. But the five-time All-Star is ramping up the activity in preparation for his return. 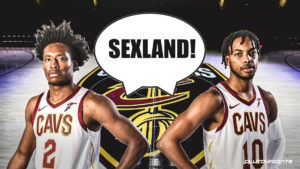