Cleveland Cavaliers power forward Kevin Love finds himself as one of the hottest commodities on the NBA trade market entering 2020. One hold-up that teams around the league may have in acquiring the five-time All-Star comes from the fact that he is in just the first season of a four-year, $120 million extension that he signed with the Cleveland organization in July 2018. But despite that, Love reportedly still prefers to be traded over sticking it out with the Cavaliers.

“Love said on Tuesday he doesn’t regret the four-year, $120 million contract extension he signed in July, 2018,” per Chris Fedor of Cleveland.com. “He understands the situation the Cavs are currently in.”

Love is a presumably in a win-win position: Should he be dealt, he’ll likely be moved to a contending team with a chance of winning another NBA Championship. Should he remain in Cleveland, he gets his money regardless.

As has been the case for much of the past three seasons, Love has battled injuries this year. That has contributed to his scoring average dipping to 16.4 points per game, his lowest mark since the 2015-16 campaign. The Cavaliers have been cautious with pushing the 12-year veteran, as the organization weighs the balance of development versus attempting to win in the moment.

With less than a month to go until the trade deadline, the Cavs will soon have to make a decision on Love if he is to be moved before the conclusion of the year. He may have over three years remaining on his contract, but could have as little as three weeks left with the team. It remains to be seen whether they will be able to find a deal for Love, but it is widely expected that they will make every effort to find a new home for him. 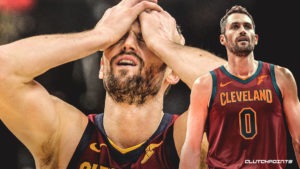 JUST IN: Cavs’ Kevin Love admits he was upset with how his recent fine was handled
Related Topics