The Cleveland Cavaliers got both Kevin Love and Matthew Dellavedova back earlier this week from injuries, just in time for an improbable run to the playoffs. Upon both of their awaited returns, Love spoke about the impact that Dellavedova has on the Cavaliers.

During a conversation about Dellavedova, Love pinpointed the veteran point guard as the ‘lifeblood of the team’. After a loss to the Philadelphia 76ers on Thursday, J.B. Bickerstaff also shared his thoughts on Dellavedova returning to the lineup to aid the team moving forward.

“It just goes to show you his commitment, his dedication, but what intelligence can bring to the game,” Bickerstaff said, via the Associated Press. “His mind wasn’t off for 13 months. When you play the way that he plays and you think the game that way that he thinks it, you can have an impact. Toughness on the defensive end, leadership, he’s always a bonus.

Due to a myriad of injuries, Dellavedova made his season debut on Thursday, logging 16 minutes for the Cavaliers. While he didn’t record a single point, he dished out five assists, and he made a few efforts plays that were appreciated by his head coach.

Though, it should be noted that Dellavedova was with the Milwaukee Bucks for a couple of seasons before landing back with Cleveland. Love and Dellavedova remain as the only two players remaining from the 2016 NBA Championship team on the Cavaliers. Nevertheless, it’s apparent that Love and other members of the Cavaliers believe Dellavedova is a key contributor to the team, whether he’s notching numbers in the box score or not. 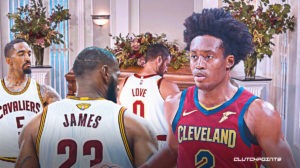