Cleveland Cavaliers forward Kevin Love is set to have an MRI to assess his nagging calf injury, per The Athletic‘s Joe Vardon.

Love missed most of the preseason and the Cavs’ season-opening tilt against the Charlotte Hornets due to his injury. He returned to face the Detroit Pistons in the second game, netting 15 points, nine rebounds, and three assists through 37 minutes played in the Cavs’ 128-119 double-overtime victory in Detroit.

Love only saw limited time on the floor against the Philadelphia 76ers on Sunday, notching four points, three rebounds, and two assists in eight minutes of action. After missing a shot in the post in the second quarter, the veteran motioned for a replacement and left the game. He didn’t return, setting up this MRI.

Nonetheless, the Cavs still managed to dominate from start to finish and come out with a convincing 118-94 triumph on their home floor. Cleveland has stunned the world so far by running out to a 3-0 start after most experts pegged them as one of the worst teams in the NBA. While the Cavs’ victory over the Sixers came without Joel Embiid on the floor, it’s hard to discount the nature of this blowout win.

Kevin Love’s MRI should reveal more details regarding the severity of his injury, along with his playing status for their coming games. With or without their veteran leader at the helm, the revamped Cavs will look to snag their fourth win of the season as they host the New York Knicks on Dec. 29. 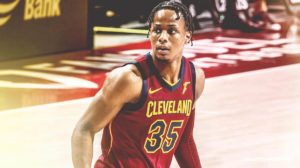