Although he didn’t start his NBA career in Cleveland, Channing Frye became a beloved member of the Cavs organization. His veteran leadership and witty personality made him a favorite in the city and in the locker room. And when the team won its first championship in franchise history (2016), Frye’s legacy in The Land was cemented forever.

Prior to the end of the 2018-19 regular season, Frye quietly announced that he would be retiring. He hinted at the thought on Instagram, noting that he was playing at Madison Square Garden for the last time. He later confirmed it on Twitter:

“Yes, I am really retiring,” the 35-year-old tweeted. “It’s been an amazing ride. I’ve had the chance to have some amazing teammates and play for some great coaches. I’m gonna miss it but I’m super excited to see the other side of the fence!”

Frye became close friends with several of his teammates over the years, including Kevin Love. Often times, the two players were seen having a laugh on the bench or in pregame warmups. Even through a 15-47 season, they found ways to lighten the mood.

Like many others, Love was sad to see his long-time friend go. In fact, Love tells Joe Vardon of The Athletic that Frye’s retirement tour “wasn’t good for his internal organs:”

“The Channing retirement (bar) tour was not good for my internal organs,” Kevin Love told The Athletic. “But I tried to spend every minute with him I could.”

Love and Frye shared a night out near the end of this season at a Cleveland-area bar:

“Don’t remember getting home,” Love wrote on Instagram. “I do, however, remember Channing ruining my speech by being a big cry baby.”

Love told The Athletic he didn’t take another drink for two weeks.

Frye played for several teams over the course of his 13-year career, including the Cavs, the New York Knicks, Phoenix Suns, Orlando Magic and Los Angeles Lakers. With each stop, he left a jovial impression.

Thanks for the memories @channingfrye. Congrats on a great career. 👏🏻👏🏻👏🏻 📸: @davidliamkyle

It’s sad to see Frye go, but as the old saying goes, all good things must come to an end. 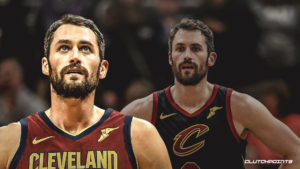 JUST IN: Kevin Love discusses not being in playoffs for first time with Cavs
Related TopicsCavaliersChanning FryeKevin Love