Currently at the forefront of the whole mental health discussion that has taken the league by storm, Cleveland Cavaliers big man Kevin Love has recently shed some more light on his struggles with anxiety. The Cavs star spoke to Jackie MacMullan of ESPN and shared how he coped with his mental health issues.

In the final piece of her five-part editorial on the much-talked-about subject, MacMullan describes how Love used basketball as an escape from his troubles.

“Kevin Love has turned to basketball his entire life to combat the mental health demons that have plagued him since he was a small boy,” wrote MacMullan.

As it turns out, Love’s battle with anxiety started at a very young age. It was only recently that he had the courage to speak about it publicly, which is hopefully able to help him in his healing process.

According to the 6-foot-10 big man, the sport of basketball has always been his refuge.

“It has always been my safe place,” he says. “It’s the physical exertion that takes your mind out of the equation. I’m fine when my mind is preoccupied. It’s the moments you are left alone that can be scary, or misleading, or when your mind can play tricks on you.”

It is amazing how Love is so openly honest about his deepest and darkest fears. He has paved the way for other NBA players to accept and open up about their own struggles. Having the issue out in the open is indeed the first step in finding a resolution. 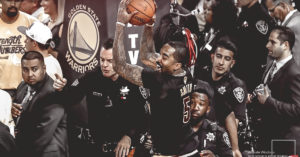