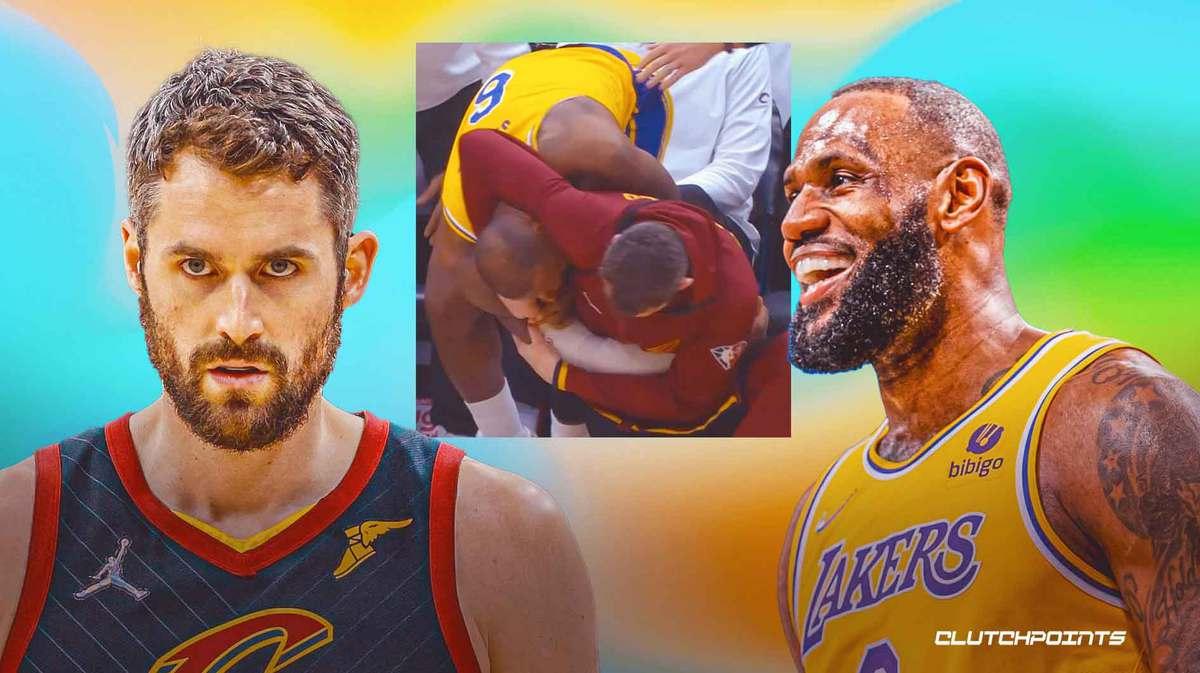 One of the most memorable dunks of the season has got to be LeBron James’ poster slam on Cleveland Cavaliers big man Kevin Love. The Lakers superstar absolutely threw it down all over Love and it left the Cavs veteran on the floor following a highlight-reel poster slam from LeBron.

Before anything else, let’s set the tone a bit. Here’s another look at James’ mind-blowing dunk on Love as well as the hilarious headlock moment that ensued:

Love just had to get LeBron back for that poster and apparently, the Cavs star thought it would be best to put James on a five-second headlock right in the middle of the game. It was all in good fun, though, and both of them were laughing about it throughout the ordeal.

The Cavs star has now spoken out about the incident and he revealed exactly what LeBron told him to make him decide that it was headlock time. Apparently, it wasn’t enough for the Lakers superstar to humiliate Love by nearly jumping all over him. For good measure, James also decided to talk smack to Love as a way of adding insult to injury:

“He asked me before I put him in that headlock, literally right before at halftime,” Love stated, via Michael Kaskey-Blomain of CBS. “He said, ‘Man, just get out of the damn way! Like what are you thinking?'”

Be that as it may, Love had nothing but praise for his former Cavs teammate turned good friend:

“We had a good laugh about it,” Love continued. “He’s one of those guys that just, his athleticism and his output and energy, what he’s able to do in an 82-game season this far into his career [is incredible]. Again, he could be the outright greatest player of all time, outright GOAT, but as far as longevity and doing it for this many years, it’s not even debatable. So again, like he’s just incredible with what he’s been able to do.”

Interestingly, Love’s fiance, Kate Bock, had a hilarious take on LeBron dunking all over his soon-to-be husband. Bock joked that they were now having second thoughts about even inviting James to their wedding following that dunking incident. Love has now spoken out about his fiance’s comments and it looks like the couple has already made a decision about LeBron’s attendance at the wedding:

“We saw each other after the game. He’ll be at the wedding, but you know, I might have to let it be known. No more of that shit moving forward,” Love said.

That’s great to hear. LeBron is one of Love’s closest friends in the NBA and it would have been a damn shame if James missed this momentous occasion just because of a vicious poster slam. Then again, the dunk was so bad that you’d be forced to think if LeBron really saw Kevin Love as a friend.

All jokes aside, though, this entire exchange just goes to show how close these two really are, as well as how much respect they have for each other. It was an epic moment for LeBron and a proportionately embarrassing one for Love, but somehow, it feels like this only brought them even closer as buddies. What these two share off the court is truly special.