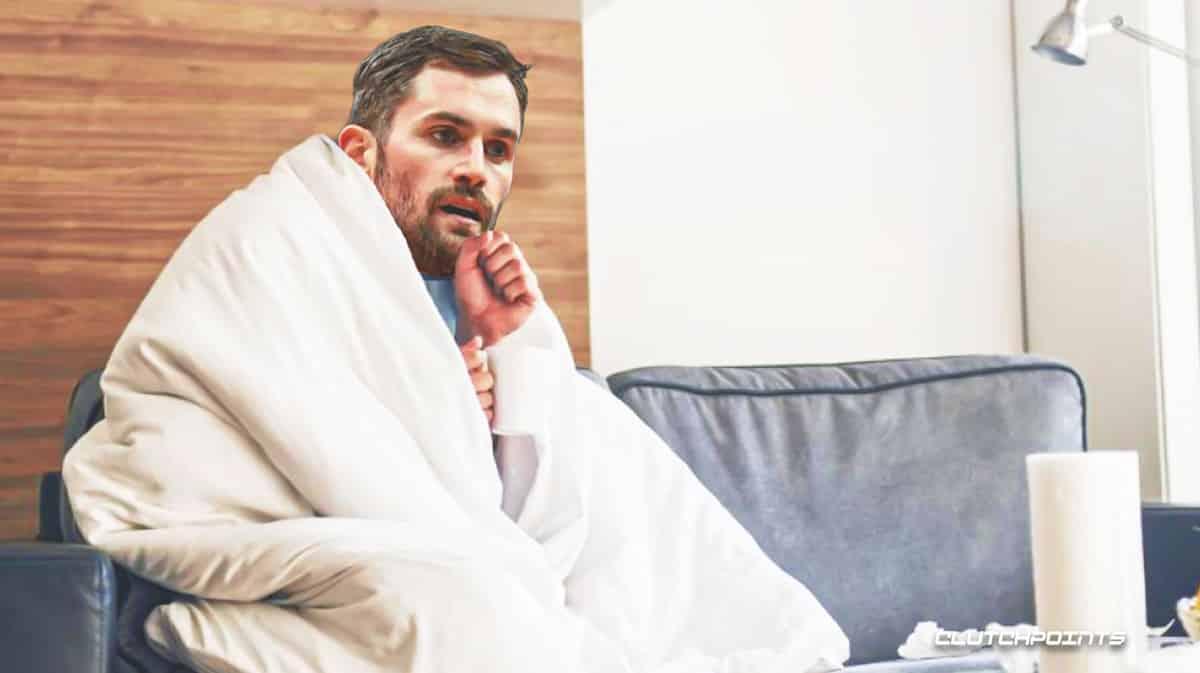 After a relatively impressive start for the Cleveland Cavaliers early in the season, Kevin Love was forced to the sidelines yet again. Unlike what we’ve all gotten used to over the past few years, however, it wasn’t another injury that sidetracked Love’s strong start. The five-time All-Star fell victim to the COVID-19 virus and unfortunately for him, the Cavs star had a rough battle with the dreaded disease.

Love recently opened up about his traumatic experience battling the virus. Especially for those that have either had the virus as well or for those of us who have recently lost loved ones because of the pandemic, the Cavs veteran’s story is an all too familiar and chilling narrative:

“I went through it, man,” Love said, via Kelsey Russo of The Athletic. “The first four or five days were pretty tough. All the usual symptoms that I think people might get. Crazy muscle aches, sensitive skin, can’t smell, taste, crazy body muscle spasms, fatigue. Then just chest and head got hit pretty tough as well. Definitely don’t wish that on anybody. After about five or six days, I started to come out of it, and probably Friday, I was able to start working out again. So, start getting my stamina and wind back these next few games.”

Previous reports suggest that Kevin Love is himself fully vaccinated. The Cavs are reportedly 100 percent vaccinated so it only follows that Kevin Love must have also gotten his jab/s done. It also goes without saying that the 33-year-old is in relatively perfect health. He’s been an athlete for pretty much his entire life and he’s been taking meticulous care of his body — with the help of professionals.

Despite all this, however, COVID still hit Love hard. This just goes to show that this disease doesn’t make any exceptions. It doesn’t matter if you’re an NBA athlete that’s at the peak of your fitness. It spares no one.

The good news for Love here is that he came out of his bout unscathed. He has since been able to make a full recovery and he returned to action for the Cavs on Wednesday against the Brooklyn Nets. The two-time NBA champion, however, missed eight games after being placed on the league’s health and safety protocols. According to Love himself, this was actually the toughest part of his recent bout against the virus:

“I will tell you, the hardest thing for me was wanting to be in those locker rooms postgame in Toronto and New York,” Love said. “Because everyone was texting me, ‘How are you doing?’ I was like, ‘Man, f–k.’ That’s the best part about seeing this team grow is how much we celebrate each other. Then it’s like everyone is pouring water on each other,” Love said. “I wanted to be around the team. Even if I wasn’t playing. Just being in those locker rooms because I know that was a lot of fun, and I saw all the videos postgame and it was pretty cool. That’s what you miss the most.”

The Cavs have been one of the biggest surprises early in the season. They won six out of the eight games that Love was forced to sit out, which included an impressive four-game winning streak.

Unfortunately for Cleveland, they recently suffered a significant blow after it was announced that rookie sensation Evan Mobley could miss up to a month due to a right elbow sprain. The former USC standout has made waves early on and it’s a shame that his hot start will now come to a screeching halt.

Mobley’s recent injury only makes Love’s return even more significant. Cavs head coach J.B. Bickerstaff knows the important role the veteran will play for the team this season and he’s just glad to have Love back. Bickerstaff commented on Love’s first taste of action on Wednesday against the Nets and despite a little bit of rust, the Cavs shot-caller had nothing but praise for Love:

“I thought he was working his way back,” Bickerstaff said. “It was the first time he’s played five-on-five since going through the protocols, so it’s been almost a couple of weeks now. So you can expect some rust, but I thought he still has an impact on the game. His intelligence, his shot-making, he still carries that same gravity with him. He helps spread the floor, still defensive rebounds and all those things. And I thought he was out there really competing and giving effort too. So I think it was a great start for him, and he’ll continue to build on it tomorrow.”

Kevin Love is no longer the dominant force he once was. He’s also not a superstar anymore. Nevertheless, you can’t deny that he will still play a key role for the Cavs this season. The intangibles he brings to the table are beyond measure. For now, it looks like Kevin Love is going to remain in Cleveland.