Without a shadow of doubt, Kevin Love is one of the most important pieces in the Cleveland Cavaliers’ metaphorical puzzle. His relentless effort on the glass and accuracy at range is simply priceless to the team’s game plans.

For whatever reason, Love’s value to the Cavs is often overlooked, despite the fact that he’s an NBA champion and one of the best stretch fours in the league. In fact, there are some hoops fans who take joy in ragging on “K-Love,” as he has come to be known.

On Friday afternoon, Barstool Sports’ Twitter account decided to take a stab at Love’s “fit” with the Cavaliers. The site posted a short video clip of a group of children “dabbing.” All of the kids went through the motions properly, except one — a blonde-haired little boy who seemed unfamiliar with the pose.

Kevin Love trying to fit in on the Cavs pic.twitter.com/cLXOqWZafs

As it turns out, the 6-foot-10 double-double machine saw the demeaning video clip. In a bit of a savage move, Love stood up for the kid who didn’t know how to dab, quoting the tweet with a bit of clap-back.

Funny thing is-cause his friends are so dope, that kid will get plenty of primo 📦 as he gets older. Trust me. Jokes on you @barstoolsports 🤡 https://t.co/0fPLUI6bjz

“Funny thing is-cause his friends are so dope, that kid will get plenty of primo 📦 as he gets older. Trust me. Jokes on you.” @barstoolsports 🤡

In the end, it seems as though Love has done quite well for himself with regards to his love life. The former UCLA Bruin stand-out has been dating supermodel Kate Brock for two years.

The next time a website feels the need to take a shot at Love (or his fit with the Cavs), maybe they’ll reconsider.

LeBron James decided to also chime in as he clearly enjoyed the exchange: 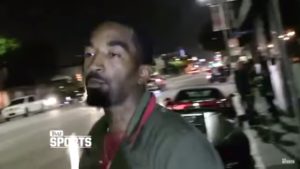 JUST IN: Cavs news: J.R. Smith says LeBron James ‘gonna be wherever the f**k he wanna be at’
Related TopicsCavaliersKevin LoveLeBron James