The Cleveland Cavaliers take on the Portland Trail Blazers on Saturday. They could be without their best player, as Cavs All-Star Kevin Love is questionable to play due to a lower back contusion.

The Cavs played on Friday, falling to the Dallas Mavericks. Love played 25 minutes and finished with eight points and seven rebounds while shooting 2-of-8 from the field. The Cavs got blown out by the Mavs, losing by a whopping 42 points.

The Blazers will have superstar point guard Damian Lillard available on Saturday. He’s missed the previous two games due to back ailments as well. Cleveland will likely lose to the Blazers, especially if Love is out.

Love is making $28,942,830 this season. He has three years left on his contract with the Cavs after this season ends. A bevy of contenders would love to acquire Love if he’s ever made available in trade talks by Cleveland. The Blazers have been mentioned as a team by pundits who should look to acquire Love if the Cavs are ready to trade him. 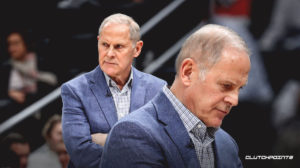 JUST IN: John Beilein hasn’t made any decisions about his lineup after benching multiple starters vs. Heat
Related TopicsCavsKevin Love