The Cleveland Cavaliers have prepared to listen to offers for star forward Kevin Love recently, with the dynamic power forward preferring to be moved to a title-contending team, according to Shams Charania of The Athletic.

Love, who signed a four-year, $120 million extension at the beginning of the 2018-19 season, still has three years and $90 million remaining on his contract after this season.

The Portland Trail Blazers were a team penned to have interest in Love, but after guaranteeing all of Carmelo Anthony’s contract for the veteran’s minimum and committing to him at the power forward spot, it’s likely they won’t be pushing to trade for the Lake Oswego native.

The Blazers also boast the biggest payroll in the NBA and trading to get Love could put them in the luxury tax for far beyond this season.

Teams making a play for Love will have to take into account a history of injuries and a diminished output from his glory days as the sole star of the Minnesota Timberwolves, now limited to being a points and boards guy with elite marksmanship beyond the arc.

Contenders will have to think long and hard before swallowing $30 million a year, especially with the NBA expecting to reduce the salary cap after China pulled its support away from the product. Hauling in a massive $30 million per year for the last piece of a puzzle could be a costly measure, especially if the gamble doesn’t result in a championship, making this trade a lot more difficult for teams that near the tax line. 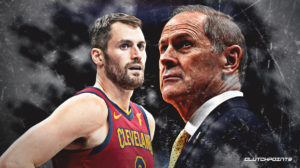