The Cleveland Cavaliers Big 3 from 2014-2017 is down to just one. Kyrie Irving requested a trade and was sent to the Boston Celtics in 2017. LeBron James delivered on his promise and headed to sunny Los Angeles in 2018. Kevin Love signed a four-year extension with the Cavs after both of those moves were made.

On Thursday, Love gave Cavs fans a little bit of a flashback to great times when he posted a video of himself and Irving together on a bus laughing it up and cracking jokes.

As most know, both Love and Irving are a part of a large contingent of NBA stars attending Team USA’s minicamp in Las Vegas, Nevada. Alongside the stars are guys like Golden State Warriors star Kevin Durant, Oklahoma City Thunder stars Paul George and Russell Westbrook, and many more

Although the four-year stint resulted in just one championship, Cavs fans will always look back to the 2016 title run as one of, if not, the greatest memories in Cleveland sports history. What the 15 guys on the roster as well as the coaching staff were able to accomplish, coming back from down 3-1 to the greatest regular season team in NBA history and the league’s first ever unanimous MVP, to win the franchise’s first championship will never be forgotten. And that brotherhood is shown in this short clip, despite both players having moved on in t heir respective career paths.

In his first four years in Cleveland, Love averaged 17.1 points, 10.0 rebounds, 2.1 assists, and 2.2 three-pointers per game on 43.3 percent shooting from the field and 37.7 percent from beyond the arc. With both Irving and James gone, Love is poised for a big season as Cleveland’s go-to guy. 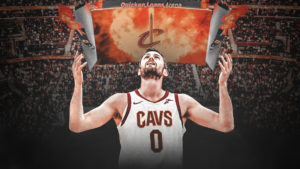