Cleveland Cavaliers All-Star power forward Kevin Love has only played with Cavs rookie point guard Collin Sexton six times this season, but he paid attention to Sexton while he was rehabbing his toe injury and is impressed with how the 20-year-old is handling his first season in the NBA.

After the Cavs defeated the New York Knicks on Monday by a final score of 107-104, Love told reporters Sexton is playing with a lot of confidence and learning from his mistakes.

"He's been able to push through."

Kevin Love explains how Collin Sexton has come along recently & what he's seen from the rookie as both a spectator & teammate on the floor. #Cavs pic.twitter.com/4n3ejQQ1lh

Sexton is fourth among rookies in points per game and fifth in assists per game. It hasn’t always been pretty, but like Kevin Love said, Sexton has been improving each month of the season and that’s all you can ask a rookie to do in the NBA. 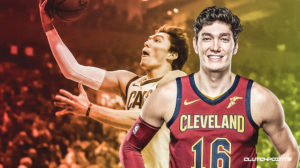