Cleveland Cavaliers big man Kevin Love’s best days are clearly behind him. His value around the league continues to drop and that’s mostly why the Cavs weren’t able to trade him at the February trade deadline.

Either no one wanted Love or the Cavs’ asking price was too high for an aging former star, via Greg Swartz of Bleacher Report:

Love’s value around the league has dropped in recent years because of his age, injury history and contract. While the 31-year-old is still producing at a high level (17.7 points, 9.8 rebounds, 3.0 assists, 38.0 percent from three), the numbers no longer match the money he’s making.

“He’s not an All-Star anymore,” one NBA scout said. “He’s a complementary player. He’s probably the fourth-best guy on a contending team.”

Whenever the Cavs try and trade Love again — and that will probably be this summer — NBA execs once again don’t expect teams interested in Love to give up a lot to acquire him since they don’t see the 31-year-old as a game-changer who can put a team over the top at this stage of his career. 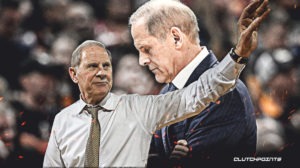