Kevin Love explains why he documented his summer on social media

Cleveland Cavaliers All-Star big man Kevin Love is a hero to a lot of people, not just Cavs fans.

Love has impacted so many people’s lives by sharing his story, and not just basketball players. The Cavs star spoke to Jeff Zillgitt of USA TODAY Sports to explain why he’s become so open lately, which includes him using social media even more:

“I used to be a guy who kept to myself and was reluctant to share my life,” Love told USA TODAY Sports. “But that was me having quite a bit of social anxiety and the feeling of constantly having a threat and swimming upstream. So I figured I’m just going to live my life and share it, and by even sharing my story through mental health, it’s allowed me to help a lot of people.

“It’s been liberating. You know what, I’m just going to share, play my cards and let the chips fall where they may.”

Love first detailed his mental health in an essay for The Players’ Tribune titled, “Everybody is Going Through Something,” where he wrote about his first panic attack and his need to seek professional help.

Since then, the Cavs’ current best player has been a strong mental health advocate. 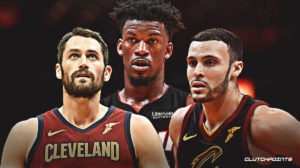