Kevin Love is among the hottest names involved in trade rumors around the NBA. With less than a month left before the Feb. 6 deadline, the 6-foot-10 big man is unsure how much longer he’ll remain a member of the Cleveland Cavaliers.

The Cavs star, who signed a four-year, $120 million extension last season, noted he doesn’t know if he will be in Cleveland for “five more months or five more weeks,” according to Marla Ridenour of The Akron Beacon Journal.

The uncertainty is floating out there for many players on the block, and Love is perhaps the biggest name of them all.

Teams interested in his services, like the Portland Trail Blazers, Denver Nuggets and Phoenix Suns, have also eyed other prospects at his position like Danilo Gallinari of the Oklahoma City Thunder, Davis Bertans of the Washington Wizards and Marcus Morris, who leads the New York Knicks in scoring this season.

Love has perhaps the most daunting contract for teams to take on, as he’s owed north of the $90 million he will make for the next three seasons. His production has severely declined. When he signed the deal with Cleveland he was in prime position to become the double-double monster he was earlier in his career with the Minnesota Timberwolves, following the departure of LeBron James.

Yet the 31-year-old has looked sluggish so far this season, and he’s also coming off an injury. Both of these factors are among the things that have worried many other front offices as they weigh trade offers.

Love recently apologized for the tantrum he threw last week as part of his frustration with the Cavs’ season and vowed not to do it again. If the Cavs act quickly, they might be able to find a trade to grant him his wish to join another team. 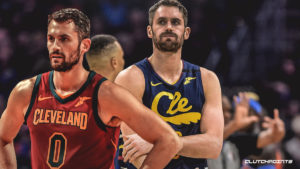 JUST IN: Kevin Love admits he has been letting emotions get the best of him of late
Related TopicsCavaliersKevin Love