Cleveland Cavaliers forward Kevin Love will be ‘100 percent playing’ on Wednesday against the Miami Heat, per Chris Fedor of Cleveland.com

Love missed the Cavs’ game against the New York Knicks due to a lower back contusion. He shared that his initial plan was to suit up against the Knicks despite suffering a hard fall the previous day. However, he felt some soreness in his back, so he pulled out of his original plan.

Monday’s contest was Love’s first missed game for the 2019-20 season. Last year, he played a mere 12 games due to a big toe injury on his left foot.

Cavs head coach John Beilein inserted rookie Kevin Porter Jr. into the starting lineup on Monday in their meeting with the Knicks. Unfortunately, the team lost 123-105, with Porter leading the scoring with a team-high 18 points.

As of this writing, the Cavs sport a 4-9 record. While they have more losses than wins, analysts see a vast improvement in the Wine and Gold’s play from last year.

Collin Sexton and Darius Garland have been relatively effective backcourt partners. Veteran center Tristan Thompson, too, has churned in several good games and has showcased that his skills go beyond crashing the boards and doing the dirty work. Scoring, too, is part of his game. 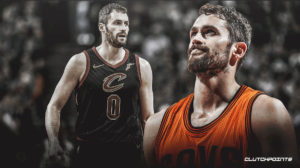 JUST IN: Kevin Love out vs. Knicks with back injury
Related TopicsCavaliersKevin Love