Brooklyn Nets superstar Kevin Durant thought he had an easy fast-break slam coming against defender Collin Sexton of the Cleveland Cavaliers on Wednesday. The 6-foot-10 forward, after all, had a massive size and length advantage over the undersized 6-foot-1 Cavs guard.

Well, KD thought wrong. At the halfway mark of the second quarter match between the two teams at Rocket Mortgage FieldHouse, Durant was about to throw down a right-handed stuff on the break to cut the home team’s lead to just one.

Most defenders would actually get out of the way on these types of plays.

Sexton, however, took on the challenge and did not give up on the play, swatting the ball out of the two-time NBA champion’s hands and securing possession for the Cavs.

Collin Sexton rips it out of KD's hands 👀 pic.twitter.com/1QSqqqW4oM

Collin Sexton is playing in his first game back after missing the Cavs’ last five games due to a bum ankle. He is picking up right where he left off and displaying his much-improved effort on the defensive end for The Land.

Before his injury, the former University of Alabaman standout was averaging 25.1 points on a blistering 53.1 percent shooting from the field and 51.6 from deep in eight games for the Cavs. For sure, Kevin Durant will be wary of Sexton moving forward 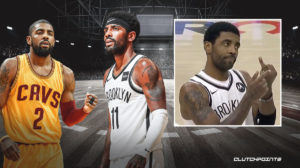