The Cleveland Cavaliers fell to the Golden State Warriors in Game 3 of the 2018 NBA Finals, and it was thanks to a masterful performance from Kevin Durant. The All-Star forward willed his Warriors to a win on a night when Stephen Curry and Klay Thompson couldn’t buy a bucket for most of the game. He finished with 43 points, 13 rebounds, and seven assists on 15-of-23 shooting from the field while Curry and Thompson combined for 21 points, nine rebounds, and eight assists on 7-of-27 shooting.

After the game, during Durant’s press conference, his former Oklahoma City Thunder teammate and current Cavs center Kendrick Perkins was seen popping out from behind the curtains towards the back of the interview room to throw up a couple of middle-fingers at Durant. Per Jason Lloyd of The Athletic:

On his way out of the arena, Kendrick Perkins stopped in the hallway and stuck his head in the interview room to see who was at the podium. When he saw it was Kevin Durant, Perk saluted him — with two middle fingers raised high over his massive frame. Without saying a word, he turned away and continued heading for the exit.

It was a friendly, yet appropriate gesture between former teammates and good friends off the court after Durant’s memorable performance took down Perkins’ Cavs and all but eliminated them from the NBA Finals for the second consecutive year.

The Cavs and Warriors will tip off Game 4 of the championship round on Friday night at 9PM EST. As everyone knows, this will be Cleveland’s last stand. They could force a Game 5 with a win, but no team in NBA history has ever come back from a 3-0 deficit in the playoffs. 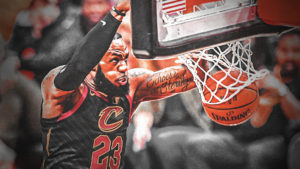 JUST IN: LeBron James calls this one of the toughest seasons of his career
Related TopicsCavsKendrick PerkinsKevin DurantWarriors