Perkins prompted the discussion after clips surfaced of Love venting his frustration on the floor during Cleveland’s loss to the Oklahoma City Thunder on Saturday night:

Frye–who was a teammate of Love’s for multiple seasons towards the end of his career–came to Love’s defense, hinting at Love’s lack of involvement on the offensive end and the idea that the Cavs are not properly exploiting mismatches:

Perkins responded in turn, questioning Love’s decision to express his emotions on the floor and calling for the veteran forward to stop with the “foolishness:”

Channing Stop!!! He’s been having breakdowns his whole Career and Kevin need to look himself in the mirror and stop with the foolishness bro.

When Frye asked for Perkins’ thoughts from a basketball perspective, Perkins iterated that the Cavs should move on from Love but also doubled down on his feeling that Love should have shown more professionalism:

I think the Cavs and Kevin need to part ways. He should have got the ball clearly but it’s ways of going about it and showing up a teammate on the court ain’t it and you know that bro

Frye agreed with Perkins, but also staked the claim that neither of the two were ever All-Stars, making it hard for them to relate to Love as a five-time All-Star on a young and inexperienced Cavs team:

Big Perk i agree, but I’ve also never been a all star. I’d throw a fit if i was out there as a “garnish” trying to win games https://t.co/kmLQhAssej

Perkins essentially ended the back-and-forth by declaring it is “time for change:”

Listen big bro all I’m saying it’s ways to handle things and that’s not the way. That’s all I’m saying and btw both of the young guards was balling tonight and it’s been multiple things that’s been happening with KLove this season. It’s time for Change

Love scored just 12 points on 4-of-10 shooting on Saturday night. While both Frye and Perkins seem to agree Love is not getting proper usage in Cleveland’s offense, their disagreement stems from Love’s recent outbursts with respect to the team and the direction of the franchise.

This all comes less than a day after Love reportedly lashed out at general manager Koby Altman during Saturday’s shootaround.

In any case, Love’s days in Cleveland might be numbered. 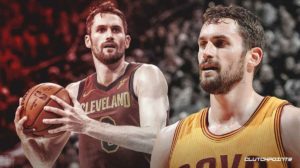