JR Smith gets out of shooting slump with help of dog Cleveland Cavaliers guard JR Smith is classified as a streaky shooter. When he’s on fire, every shot he makes is bound to swish the net. Yet when he’s cold, he’s cold as ice. There are nights where he can’t seem to find a bucket despite his seemingly smooth touch.

But the playoffs are right around the corner. Smith can’t afford to be cold from the field come playoff time. Perhaps in an effort to cure his shooting woes, JR Smith enlisted the help of a dog. The canine didn’t exactly accompany Smith during his shooting drills. Instead, it served as a form of stress-reliever — something to take his mind off of basketball.

Per Dave McMenamin of ESPN, Smith shared his experience with Remington, a golden retriever who serves as University of North Carolina baseball team’s service dog:

“It was right on time, especially for me,” Smith said of his interaction with Remington. “I’m an emotional person. I live in my head. I don’t really express a lot of things. But let’s just say it was right on time.”

Below, Smith with Remi:

It was the Cavs’ head trainer Steve Shapiro who had the idea. He said:

“We looked for it to be a potentially very positive impact in a casual setting where the guys could enjoy being around Remington, who is an extremely loving and talented service/therapy dog.”

The experiment turned out effective. Before meeting with “Remi,” Smith struggled in the Cavs’ first two games of their three-game road trip. He contributed just six points and was 3-of-9 from the field. After meeting with Remi, he logged in 19 points off the bench on 8-for-9 shooting. He also snagged five rebounds, handed out three assists, and three steals. More importantly, the Cavaliers won, 118-105. 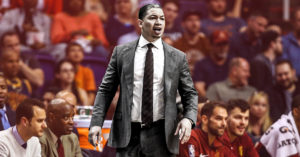