The fairy tale for the entire Filipino nation of having Fil-American Cleveland Cavaliers guard Jordan Clarkson participate in the national team’s upcoming Asian tournament has finally reached its bitter end. Despite getting the necessary paperwork in for the Cavs stud, the basketball association of the Philippines was ultimately outdone by a standing NBA rule.

The NBA released a statement addressing this matter, and it made it abundantly clear that Clarkson was to take no part in his country’s upcoming games, due to the fact that the tournament in question is not sanctioned by FIBA.

“The NBA’s agreement with FIBA stipulates that NBA players can participate in the Olympics, the FIBA Basketball World Cup, Continental Cup competitions, and associated qualifying tournaments,” read the statement, per Charmie Lising of ESPN5. “Because the Asian Games are not one of those competitions, NBA players are unable to participate.”

The Philippines national basketball team are scheduled to compete in the upcoming 2018 Asian Games which will be held in Jakarta, Indonesia. Slated to commence on August 18, the pan-Asia tournament is organized by an association governed by representatives of its participating nations. Unfortunately for Clarkson and the Philippines, it is not FIBA-sanctioned, thereby eliminating Clarkson’s eligibility via a technicality.

“In accordance with the NBA’s agreement with FIBA, Jordan is welcome to represent the Philippines in the agreed-upon competitions,” the statement added.

All parties involved are hoping that nothing stands in the way of Clarkson’s much-anticipated debut for the Philippine national men’s basketball team. 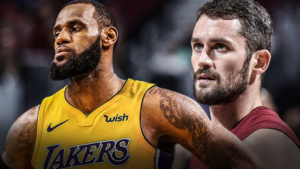 JUST IN: LeBron James reacts to Kevin Love saying he can’t get away from Lakers star
Related TopicsCavaliersJordan Clarkson