For coach John Beilein, the NBA moment of the decade is when the Cleveland Cavaliers won the 2016 NBA title, per Cavs beat reporter Chris Fedor.

Beilein answered the question without hesitation. While some may not agree with him, the Cavs’ 3-1 comeback against the 73-win Golden State Warriors squad is definitely in the running for the league’s moment of the decade.

Every single fan in the NBA was confident that when the Warriors locked in their 73rd win of the season — surpassing the record set by the 95-96 Chicago Bulls — that they were going to be the ones who’ll win the title.

Stephen Curry and the rest of the squad were at the height of their powers. Curry was crowned the unanimous MVP (his second overall). He also broke several 3-point shooting records. The Cavs, though led by LeBron James — arguably the best player on the planet — were considered the underdogs of the series.

But lo and behold, James and the Wine and Gold fought back one game at a time, putting on vintage performances that will be remembered forever. Kyrie Irving, too, put on stellar games that cemented his place as a clutch performer.

Cavaliers fans will never forget the block, the shot, and the stop by its stars. The chase down block by James on Andre Iguodala might be the greatest defensive play of the decade. Irving’s 3-point shot — which proved to be the game-winner — might be in the running, too, for the shot of the decade. And finally, perhaps the most underrated moment of the decade is Kevin Love’s defensive stance of Stephen Curry. 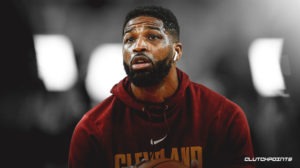