John Beilein has resigned from his position as head coach of the Cleveland Cavaliers, Cavs general manager Koby Altman announced on Wednesday.

Beilein will be reassigned to a different role within the organization:

“Over these last nine months, I have given my all to this organization, but after much reflection, I have decided that it is best that I step back and resign from my position as head coach of the Cleveland Cavaliers and assist the organization in a different capacity,” said Beilein. “I am very grateful to Dan Gilbert, Koby Altman and the entire Cavaliers organization for the opportunity they have provided me.

“This was a very difficult decision for me, but I want to be clear – this was my decision to step down and I truly appreciate the understanding and support of the front office during this time. I find losing very challenging and this year has taken a much bigger toll on me than I expected. I grew concerned for the consequences this toll could potentially take on my own health and my family’s well-being down the road. I was not certain I could be at my best for the remainder of the season and in the future. That would not be fair to the players, coaches and support staff.”

The Cavs went 14-40 prior to the All-Star break. That is the worst mark in the Eastern Conference.

The Cavs will now promote J.B. Bickerstaff to head coach. Bickerstaff was initially hired as part of an eventual succession plan with Beilein, who struggled in the job both on the court and in the locker room.

The second post-LeBron James era is going just like the first one: terribly. At least the first one netted the Cavs Kyrie Irving, though. The second one has seen a Tyronn Lue firing, a Kevin Love outburst at Altman, a weird Andre Drummond trade and now the Beilein situation. 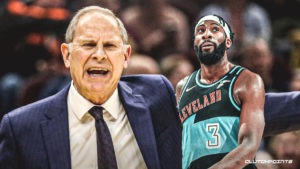