Though he was ultimately taken at No. 3 overall by the Sixers in the 2014 NBA Draft, Cameroonian big man Joel Embiid wanted to go No. 1 to the Cavs. In fact, the three-time All-Star made a pitch to then-GM David Griffin in an attempt to earn his favor in the draft:

“Come on, Griff, you gotta draft me!,” Embiid said, via Yaron Weitzman of Bleacher Report.

During a 2014 draft workout with the Cavs, Joel Embiid was telling GM David Griffin to take him with the top pick.

Be it by fate or by luck, the Cavs landed the No. 1 overall pick in the 2014 NBA Draft Lottery. It was a tough time for the franchise, as it had missed the playoffs in four consecutive seasons. Cavs owner Dan Gilbert made several changes ahead of that campaign, firing general manager Chris Grant, as well as Mike Brown, who was serving as the team’s head coach. As a result, Griffin was brought in to serve as GM.

One of Griffin’s first jobs as Cavs GM was scouting the talent at the University of Kansas. According to Bleacher Report, he was interested in two Jayhawks players: Joel Embiid and Andrew Wiggins.

Griffin and the Cavs brought Embiid in for a pre-draft workout, where he was pitted against Vitaly Potapenko, a 6-10, 275-pound former NBA player who was serving as an assistant with the team at that time. By the end of the workout, Embiid had proven his mettle in a big way. In fact, there were reports stating that he tossed Potapenko around “like a rag doll.”

After proving his strength in the post, the Cavs gave Embiid an opportunity to show his accuracy from mid-range. He finished the workout by draining a series of threes.

“How could you not draft me No. 1?” Embiid shouted at Griffin, via Bleacher Report.

Another ripped through the net.

Griffin was certainly impressed, calling Embiid’s workout one of the best he’d ever seen. However, concerns surrounding a stress fracture in Joel’s right foot later raised a bit of concern with regards to his draft stock. Roughly one week earlier, Bismack Biyombo landed on Embiid’s foot during another workout in Santa Monica.

The morning after his workout in Cleveland, Embiid began to experience a lot of pain in his foot. He tried to shake it off, but the pain was causing a fair amount of discomfort. He underwent an X-ray at Cleveland Clinic, where his fracture was revealed.

Ultimately, the Cavs decided to go with Embiid’s Kansas teammate, Andrew Wiggins, at No. 1 overall. However, Wiggins was then traded to the Minnesota Timberwolves for Kevin Love. Shortly after that, LeBron James penned his “I’m coming home” essay for Sports Illustrated, and the rest was history. They were defeated in the 2015 Finals, but the Cavs managed to claim their first championship in 2016, defeating the Golden State Warriors in epic come-from-behind fashion.

The Cavs’ storyline could have looked much different had they drafted Embiid in 2014. He’s become one of the best big men in today’s game, but would his presence on the roster have equated to the same results — four straight trips to the Finals? David Griffin is a man who wasn’t afraid to pull the proverbial trigger with regards to big deals and signings, but he must have felt that Wiggins was the best option at that time.

Though he’s still averaging a double-double, Embiid’s numbers are a bit down this season. In his 44 appearances thus far, the 25-year-old center has racked up averages of 23.4 points on 47.4 percent shooting from the field (34.8 percent from beyond the arc), 11.8 rebounds, 3.1 assists and 1.3 blocks in 30.2 minutes per outing. 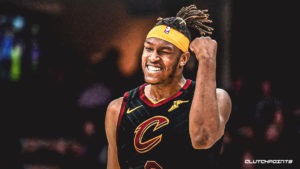