Things would’ve stayed the same for Andre Drummond and the Cleveland Cavaliers if only the blockbuster James Harden trade didn’t go down back in mid-January. According to Bleacher Report‘s Jake Fischer, the Cavs never thought that they could land Jarrett Allen but immediately pounced on the opportunity once it presented itself.

Cavs general manager Koby Altman was initially planning to continue to work with Drummond at the helm along with the development of both Collin Sexton and Darius Garland. The team projected that they would enter the 2021 offseason with a capable core along with money to spend.

However, the Rockets eventually decided that their partnership with Harden should already come to an end. They weren’t interested in keeping Jarrett Allen and Caris LeVert so they had to pull in other teams to join the mix.

The Houston-based squad then chose to acquire a two-time All-Star in Victor Oladipo from the Indiana Pacers as they hoped that he would recapture his previous form. Meanwhile, the Cavs got their hands on Allen by only giving up a 2022 first-round pick by way of the Milwaukee Bucks.

Allen’s arrival in Cleveland didn’t bode well with Drummond as he wanted to keep his starting position. After failing to find a resolution, the big man’s camp decided that they will sit out the Cavaliers’ games until he gets traded.

After the trade deadline, both sides eventually agreed to a buyout and the 27-year-old took his talents to the Los Angeles Lakers on a one-year deal. Losing an All-Star-caliber player like Andre Drummond will definitely be a huge blow for the Cavs but getting Jarrett Allen on board is certainly not a bad trade-off, especially for their rebuilding cause moving forward. 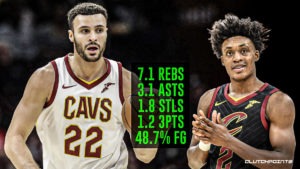