J.R. Smith won’t ask for or take buyout from Cavs Cavs shooting guard J.R. Smith has no plans to request or take a buyout from Cleveland, so he may remain with the team until the end of the season, according to Joe Vardon of The Athletic.

Smith just escaped a league fine after publicly commenting on his desire to be traded, but he doesn’t plan to lose any money in buyout negotiation, as he approaches the final year of his deal once the 2018-19 season comes to a close.

The veteran is making $14.72 million this season and will make an even heftier $15.68 million the next if he opts into the last year of his deal. Out of that sum, $3.87 million become fully guaranteed if he’s not waived before the June 30 deadline, right before the start of free agency.

J.R. Smith holds no value in the trade market as it is now, and oh have the Cavs tried to move him, but it’s a tough sell, given he’s coming out of the worst two seasons of his professional career and an aging player.

The 33-year-old reportedly refused to be away from the team when given the option by the front office, remaining with the rest of his teammates despite the Cavs’ plan to make the most of their youth by maximizing their floor time this season.

Smith’s salary becomes more enticing during his last year, either as a salary filler for a team under the cap or a quick roll of the dice by a team in need of outside shooting. 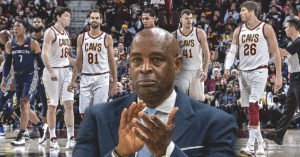 JUST IN: Larry Drew says there has been progress on a restructured contract
Related TopicsCavsJ.R. Smith