LeBron James might be gone from the Cleveland Cavaliers, but J.R. Smith still has his eyes on winning an NBA championship this year. After practice on Wednesday, he said just because people have come and gone this offseason, the goal hasn’t changed.

“The regular season is to get ready for the playoffs,” J.R. Smith said via 247 Sports. “Just because people come in and out don’t mean the goal has changed. The goal stays the same — try to win a championship, that’s every year, no matter who is in this jersey and who is not.”

The Cavs did lose James this offseason but they still do have some nice pieces on this team.

Kevin Love signed a long-term extension this offseason and Rodney Hood has proven to be a good player, even if he struggled during the playoffs. They also drafted Collin Sexton, who has already received rave reviews and some have compared him to a former Cavaliers point guard Kyrie Irving.

Smith is still expected to play a role on this team but there is a question about what kind of role that will be. He is coming off a bad season last year, including the crucial mistake during the NBA Finals where he didn’t know what the score was and cost the Cavs a chance at a victory.

Last year he averaged 8.3 points, 2.9 rebounds, and 1.8 assists while shooting only 37.5 percent from the field. If the Cavs want any chance to make the playoffs and even have a chance at an NBA title, Smith is going to have to be one of the guys that steps up. 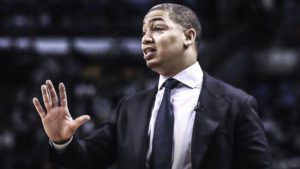 JUST IN: Tyronn Lue says this year will be about ‘wins and lessons’
Related TopicsCavaliersJR Smith