The LeBron poster in Cleveland was the stuff of legends. The speedy teardown of it after James took off to Miami was a metaphorical moment in Cleveland sports. James was promptly given another poster after the prodigal son returned after four years in sunny South Beach.

After James decided to head west for the Los Angeles Lakers, the poster coming down was unceremonious. There wasn’t the same vitriol from the fanbase following his first exile because this time he was leaving after delivering on his promise: bringing back a championship.

But Smith seems to have an idea for how Cleveland can fill that void left by LeBron, metaphorically as well as literally.

This is hilarious an not far off! I know it’s only one game but you have to start somewhere! With hard work an dedication anything is possible! Keep it @bakermayfield an @clevelandbrowns your time is now! #HomeTeam #Brownies

Mayfield is coming off of an impressive debut in which he led his Cleveland Browns back to beat the New York Jets for the franchise’s first win since Dec. 24, 2016. Yes, you read that correctly. 2016.

But there is certainly much for Cleveland fans to be excited about. Mayfield looks and acts the part of a field general with a swagger. Fans are desperate for another star to take control of the city. Of course, Mayfield is a long way off from getting his own gigantic poster in downtown Cleveland, but Thursday night was a good start.

Smith seems to think that Mayfield is off to the right start and he makes sure to let the young quarterback know that his time is now. He has an opportunity to take hold of Cleveland for the next 15 years. Let’s see how long it takes for Mayfield to get that poster up for real. 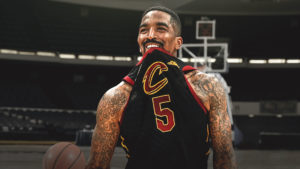