The Cavs engaged in a tightly-contested matchup against the Los Angeles Lakers on Monday night at their home floor. However, they failed to execute plays in crunch time as they eventually succumbed to a narrow defeat.

Cavs head coach J.B. Bickerstaff felt that his team could’ve had a better shot at upsetting the Lakers if the officiating in the game was only better.

“I think it was some momentum-changing calls that were made or weren’t made,” Bickerstaff said via Cleveland.com. “I think our guys showed up and gave the effort to deserve the respect that both teams should garner. Tonight, I don’t think that was the case. The Lakers are a hell of a basketball team, don’t get me wrong. They deserve everything they have coming. But our guys scrap and play hard and deserve the same. Were there plays that we made down the stretch where we could have made better decisions? Sure. But it’s hard to overcome the champs plus.”

After trailing 34-23 by the end of the first quarter, the Cavaliers pulled themselves together and mounted a 35-point outburst in the second quarter to get back in the game. The Cavs continued their good showing in the third quarter until LeBron James exploded for 21 points in the final frame.

Cleveland didn’t have any answer to the scoring production of their former star player. The Lakers eventually got the win and emerged victorious on a 115-108 decision.

Cavs big man Andre Drummond had another huge performance in the paint, bannered by his 25 points and 17 rebounds. Cedi Osman also notched 20 points followed by Collin Sexton who added 17 points and six assists of his own.

The four-time MVP in LeBron James led his team with a total output of 46 points, eight rebounds, and six assists to tighten their grip for the top spot in the Western Conference.

Even with the loss, Cleveland still held their ground and managed to threaten the reigning champions despite being the clear underdogs. J.B. Bickerstaff and the Cavs are hoping that they can get better calls as they aim to halt a two-game losing skid when they host the Detroit Pistons on Jan. 27. 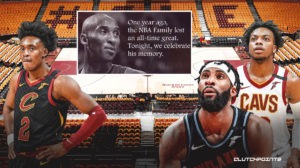