Last year, Isaiah Thomas was one of the best players in the NBA. The 5-foot-9 point guard scored nearly 29 points per game while finishing fifth in the MVP voting.

Thomas led the Boston Celtics to the best record in the Eastern Conference. In the playoffs, the now-Los Angeles Lakers guard faced a variety of adversity. In the second round of the postseason, he lost his younger sister in a car accident.

Also, Thomas aggravated the hip injury sustained earlier in the season and it led to him being shut down for the remainder of the playoffs, derailing the Celtics’ title hopes. Long story short, he has faced adversity throughout his career.

Since his first season in the NBA, Thomas has been traded numerous times already. Last year, even the Celtics traded him to the Cleveland Cavaliers in a package that included Kyrie Irving. These incidents must have contributed to Thomas’ extra-confident attitude, which reportedly got on the nerves of the Cavs’ staff and players, according to ESPN’s Dave McMenamin and Brian Windhorst.

The All-Star whom the Cavs got for James wasn’t impressing him. Or other players on the team. As one team source put it, when asked about Thomas in the week leading up to the trade deadline: “I’m all for an underdog story, but you usually expect some humility to be a part of that story.”

Thomas’ lack of humility is probably not the only reason why the Cavs wanted him gone. He was a vocal critic of many of the team’s tendencies, which could have irritated many of the players. Furthermore, he was utterly exposed on the defensive end of the floor numerous times.

Though, it’s unlikely that Thomas cares what others think about him at this point. He has since moved on and is looking toward finding a permanent NBA home. 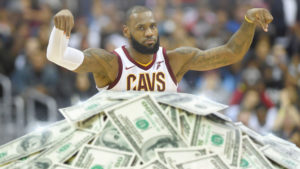 JUST IN: Cavs can offer LeBron James $53 million more than anyone else in free agency
Related TopicsCavaliersIsaiah ThomasLakers