Now could be a good time for newly-minted Cleveland Cavalier Isiah Thomas to use the delete tweet feature of Twitter.

It didn’t take long for the internet to recover a very old tweet from Thomas right after the spitfire guard was traded by the Boston Celtics to Cleveland in an explosive deal that quickly lit up Twitter and sent the social platform’s best investigative minds scrolling down Thomas’ own Twitter account.

Haha all u lebron fans that's the difference between KOBE and LEBRON… Kobe wouldn't let anybody punk him like LBJ let boston do. He's OUT!

The NBA can be cruel and funny at the same time and this is just one evidence of that. It wasn’t long ago when Thomas and the Celtics were dropped in the Eastern Conference Finals by LeBron James and company, and now he has to work with the same dude he eviscerated on social media seven years ago.

In fairness to Isaiah Thomas, though, he was still a 21-year-old Washington Huskie when he sent that tweet out. For those wondering, that tweet was sent out after the Celtics eliminated James and the Cavs in the 2011 Playoffs.

Wherever you are, Isaiah, just always remember that the internet never forgets. 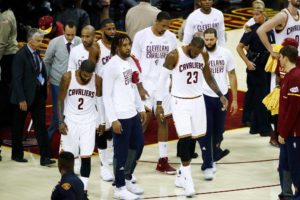