Injury prevention drives most of Cleveland Cavaliers All-Star Kevin Love’s summer exercises, as the lone star on the Cavs wants to stay healthy next season after having an injury-riddled 2018-19 campaign.

Love played in just 22 games last season after undergoing toe surgery on his left foot in November. For the Cavs to be competitive in the Eastern Conference in 2019-20, Love has to play in as many games as possible and the five-time All-Star is working hard this summer to ensure that happens.

If he’s not cheating, he’s waking up early. Love says he works out first thing, heading downstairs to the gym in his apartment complex. Love says he’s trying to cut weight as much as he can. “I’m heading into my twelfth season now, so I’m trying to keep the joints and muscles super lubricated and keep them elastic as much as possible.”

For Love, injury prevention drives much of his exercises: stretches to open up his hips, band work for his shoulders, free weights and body weights to build strength. He has every intention of staying on the court during the upcoming season and beyond, especially since former superstars LeBron James and Kyrie Irving left Cleveland in the past few years following their championship in 2016. Love is the team’s sole superstar. 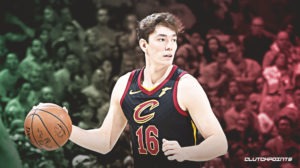