The Cleveland Cavaliers will move forward without guard Cameron Payne on their roster. The team informed Payne on Friday that they will not be holding onto him for the rest of the season, per Joe Vardon of The Athletic.

Payne, 24, was signed to a second 10-day contract by Cleveland a week ago, where he was averaging 8.8 points on 50.0 percent shooting and 2.8 assists in four games per 17.7 minutes played.

The Murray State product has been somewhat of a miniature journeyman since being drafted with the No. 14 overall pick in the 2015 NBA Draft. He has since played for the Oklahoma City Thunder, the Chicago Bulls, and was recently claimed by the Cavs off waivers.

With the Bulls earlier this season, he received 12 starts in 31 games played, averaging a mere 5.7 points and 2.7 assists in 17.3 minutes per game.

In what now seems like a peculiar turn of events, Cleveland will refrain from seeing what becomes of the 6-foot-3 ball handler. The Cavs will have one open roster spot, which has been filled by multiple players throughout the season. Sources said the team will most likely sign another player to a 10-day contract to help with depth during next week’s three-game homestand that begins Tuesday (h/t Chris Fedor of Cleveland.com).

Payne, however, isn’t too worked up about the news.

“I feel really good about how I played here,” Payne told Cleveland.com. “It’s understandable that they want the roster spot.”

Although in the end, Cleveland’s decision makes sense, it’s still unclear why the team refused to play the waiting game with such a young guard like Payne who still has a ton of promise as a shoot-first backcourt option.

Cameron Payne has averaged 6.0 points, 1.8 rebounds, and 2.5 assists in his four-year career. 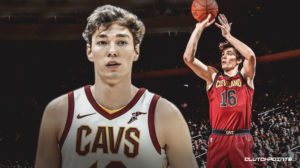