While some felt that it was a long time coming, Cleveland Cavaliers head coach Larry Drew was surprised by the firing of Tyronn Lue.

To recall, after a 0-6 start to the season, the Cavaliers front office fired Lue and placed Drew into the head coaching spot. Cavaliers fans and the rest of the NBA were somehow not surprised by the move. But Drew, who’s been part of the wine and gold’s coaching staff since 2014, believes that Lue did not deserve it.

“I was stunned. And I think I was more hurt than stunned,” Drew said, per Joe Vardon and Jason Lloyd of The Athletic. “I didn’t think that he deserved it.”

Though Drew didn’t expound further on his argument, Lue’s achievements can stand on their own. In the Cavaliers’ remarkable championship run in the 2016 NBA Finals, analysts believe that he simply out-coached Steve Kerr of the Golden State Warriors.

In the process, he mounted a 3-1 comeback against a 73-win team and became one of the few rookie coaches to snag a ring in their first season. Whispers around the league strongly believe that it was LeBron James who was the “real” coach of the team. But Drew, who has actually worked with the two, probably knows better. And he believes that Lue should still be the head coach of the Cavaliers right now. 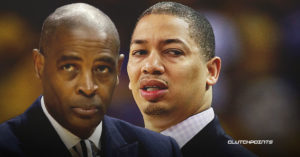