Cavs’ George Hill back from injury, could start beside Collin Sexton vs. Raptors

Per cleveland.com‘s Chris Fedor, prior to Saturday night’s game against the Toronto Raptors, Cleveland Cavaliers head coach Larry Drew announced that Cavs point guard George Hill would return to the lineup after missing the last 11 games with a shoulder injury. Further, Drew is considering starting Hill — who was one of Cleveland’s most consistent contributors prior to his injury — alongside rookie point guard Collin Sexton.

“It gives us another ball-handler on the floor, another guy who can make plays,” Drew said. “It gives us speed, it gives us quickness. I like Collin’s ability to play off the ball, too. I don’t want him to be just a one-dimensional player where everything is happening with the ball in his hands. I think he can be a terrific player off the ball and teams can’t lock into him as easy as he is on the ball. There’s some pros and cons to playing them both together, but I do think the pros outweigh the cons.”

George Hill has averaged 12.6 points, 3.0 assists and 1.0 steal per game this season while shooting 55.6 percent from the field and 48.0 percent from three-point range. A savvy veteran who understands how to control the pace of the game and built a respectable reputation on the defensive end throughout his career, Hill’s ability to make plays for his teammates off the dribble and be a reliable weapon off the ball will only enhance the offensive efficacy on a team that has become overreliant on players scoring in isolation.

Hill’s experience and guidance will also benefit Collin Sexton, as he advises the 19-year-old on how to improve his production on both ends of the court. The Cavs rookie has averaged 18.5 points, 4.4 rebounds ,and 2.9 assists per game while shooting 46.0 percent from the field and 45.8 percent from three-point range since becoming a starter and while he’s shown growth in his understanding of the game, on both ends, the neophyte clearly has a lot to learn about the position.

The only negative that comes with George Hill starting for the Cavs is that point guard Andrew Harrison, whose production is entirely too replaceable, will continue to be the team’s backup point guard unless Drew begins to trust a player like Alec Burks in that role.

It’s unclear who will move to the Cavs’ bench between swingman Rodney Hood and forward Cedi Osman if Hill is inserted into the starting lineup. Osman is seen as a cornerstone player and so he may very well keep his spot. However, while Hood has been more efficient and a solid all-around contributor, Osman’s aggressiveness and point-forward ability could be better for a second unit that’s been unspectacular, to say the least. 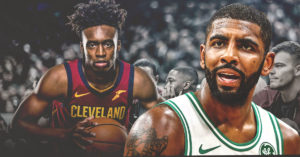