Cleveland Cavaliers shooting guard Rodney Hood is a far cry from the player he was with the Utah Jazz. Prior to being traded to the Cavs in a blockbuster deadline-day three-team deal that also involved the Sacramento Kings, Hood was an integral part of the Jazz team that went on to finish fifth in the Western Conference this year.

However, the change in scenery has not worked well for Hood so far and he has not been the same since.

Lee Jenkins of Sports Illustrated recently revealed that Basketball Hall of Fame inductee Gary Payton tried to light a fire under the embattled 25-year-old former Duke University standout. The events transpired prior to Game 1 of the NBA Finals when The Glove spoke to Hood in one of the Cavs’ practice sessions.

Payton himself shared what he had to say to Rodney Hood despite the fact that the two had never met before.

“I told him, ‘You can play this game,'” said Payton. “‘You’ve played this game your whole life. You have to stop thinking about all these other different things. You’ve got a guy on your team who can do anything, and if you get him to gain confidence in you, he’ll find you out there and you can knock those shots down just like you’ve always done.'”

Kudos to Payton for his intentions as he, like most of us, recognize that this is more of a psychological dilemma for Hood. The 6-foot-8 guard has already proven his caliber in the past and we are all hoping that he is able to rise above this setback. 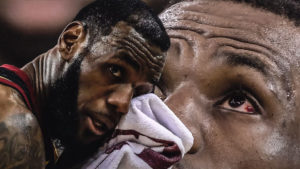