LeBron James usually performs best when the spotlight is brightest and that was the case in Game 7 against the Indiana Pacers.

Game 7’s are also usually one of the most exciting games in any sport, because it’s win or go home, and usually brings out a type of urgency from both teams. Putting those two things together usually makes for must-watch TV so it’s not a surprise that according to Darren Rovell of ESPN the game between the Cleveland Cavaliers and Pacers was the most watched first-round game in 14 years.

JUST IN: Cavs-Pacers Game 7 is the most watched first round NBA playoff game in 14 years, since 4/25/04 Rockets-Lakers Game 5.

Karl Malone led all scorers in that game with 30.

What LeBron did in Game 7 was his best performance in such a game ever. In 43 minutes he put up 45 points, nine rebounds, seven assists and four steals. He shot 16-25 from the field and 2-3 from deep.

For the Pacers, they were led by Victor Oladipo who had himself a nice game, only to be overshadowed by James. He played 41 minutes putting up 30 points, 12 rebounds, six assists and three steals.

In this series, the Pacers actually were the better team and played better most of the series, but the Cavaliers had James and that was the difference.

Cavaliers head coach Tyronn Lue was really impressed with what James was able to do not just in this game, but throughout this series.

“It’s hard to put it into words, but that’s why he’s the best player on the planet,” Lue said following the game, according to Scott Sargent of Bleacher Report. “He put us on his back scoring the basketball, facilitating, being aggressive, getting the bigs in foul trouble a lot throughout the course of this series by attacking the basket and just getting to the free throw line, which put a lot of pressure on their defense. So, he did it all for us this series.” 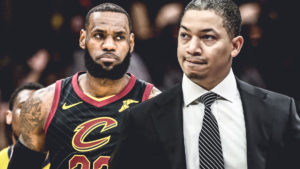