Former Cleveland Cavaliers general manager David Griffin appeared on ESPN’s “The Jump” program on Friday to clarify comments he made about LeBron James.

Griffin, who’s the executive vice president for the New Orleans Pelicans now, said in an interview with Sports Illustrated earlier in the week that his former star James wasn’t the same “animal” after the near-impossible Cavs victory over the Golden State Warriors in seven games, winning the franchise’s first Larry O’Brien trophy in 2016.

From Jake Fischer in Sports Illustrated:

They of course found vindication in 2016, historically overcoming a 3-1 series deficit against the 73-9 Golden State Warriors in the NBA Finals. The following season, however, brought that fantasy summer crashing back to reality. James’ contagious hunger to deliver a championship for Northeast Ohio dissipated. “There wasn’t a lot else for him,” Griffin says. “I don’t think he’s the same animal anymore about winning.”

Griffin oversaw the roster construction and management of the title-clinching Cavs three years ago, leaving the franchise in 2017 when he and team owner Dan Gilbert did not renew the executive’s contract. The Pelicans contracted Griffin in April of this year, where he’s gone on to draft Zion Williamson and trade Anthony Davis to James’ current team, the Los Angeles Lakers.

Clarifying his comments from Thursday’s published SI interview, Griffin told ESPN, “I failed miserably in getting everyone to the right sense of urgency following the championship.” Deflecting slightly, Griffin also added that the pull-quote from the interview was part of an ongoing conversation related to the former Cavs exec’s current status in rebuilding the Pelicans.

David Griffin joined The Jump to clarify his comments on LeBron losing his hunger to win: pic.twitter.com/MZv7eELvw1

“My belief at that time was, there’s no way anybody can be born in Akron, Ohio, deliver the first championship in 52 years to Cleveland, Ohio, and be the same human being—it’s not possible you’re a person you’re a human being,” he continued. Griffin also mentions he “feared” James wouldn’t have the same “animal-like desire” to win, which he’s since seen become untrue. 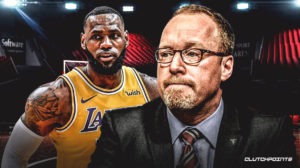 JUST IN: David Griffin clarifies ‘LeBron is getting all the credit and none of the blame’ comment, says he was talking about media portrayal
Related TopicsCavsDavid GriffinLeBron James