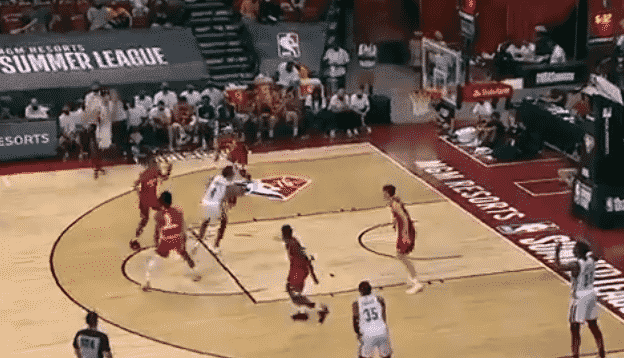 Evan Mobley, the No. 3 pick in this year’s NBA draft, has begun his professional career in earnest by playing his first pro game in the NBA Summer League with the Cleveland Cavaliers. The Cavs have to like what they see thus far.

Mobley is displaying the diversity and depth of his skill set, making an impact at both ends of the floor for the Cavs in their game against the Houston Rockets.

Evan Mobley gets his first bucket for the Cavs as he finishes the smooth left handed lay off the drive! pic.twitter.com/WeLSF8l005

Some really tight defense from Josh Christopher, but Evan Mobley is still able to turn the corner and hit the off balanced floater. pic.twitter.com/zbtotV8cBM

The above highlights are offensive highlights, but Mobley also created turnovers with his long limbs and advanced footwork. He has already shown an ability to guard multiple positions, clog passing lanes, and disrupt the flow of halfcourt sets, creating easy transition baskets at the other end of the floor for the Cavs.

It is clear why Evan Mobley was a top-three draft pick. It’s only the summer league, so we shouldn’t get ahead of ourselves here, but the USC product has been able to get to the rim. He demonstrated a soft touch on a mid-range shot. He has been able to get by defenders on the dribble. He is generating stops and demonstrating his defensive competence on the perimeter and in the paint. The variety and versatility — at both ends — are readily apparent. This is what the Cavs thought they were getting when they took Mobley at No. 3.

It is not lost on anyone that this first NBA Summer League game matches Mobley against Houston’s Jalen Green, marking this as a clash between two of the top three picks in the NBA draft. Green and Mobley both started this game well, giving NBA fans — not just Cavs and Rockets fans — a taste of what could emerge in the next decade of professional basketball.

The Cavs have every reason to think that their ceiling will soon rise, given what Evan Mobley is capable of.