Cavs rookie Dylan Windler recently joined Evan Dammarell of Forbes for a wide-ranging interview. Amid their discussion, the former Belmont Bruins standout paid homage to LeBron James and his accomplishments in the city of Cleveland.

In Cleveland, there are a few names that reign supreme in sports lore. Browns fans would be quick to mention Jim Brown or Otto Graham — two legendary figures in NFL history. For Indians fans, names like Thome, Feller and Ramirez might come to mind, though there are plenty of others. In basketball, however, it was LeBron James who delivered his promise of a championship.

Be it by fate or by skill, James and the Cavs pulled off one of the biggest upsets in Finals history in 2016, defeating the Golden State Warriors in epic come-from-behind fashion (down 3-1).

Windler knows the importance of James’ legacy in the Northeast Ohio area, and he’s happy to be a small part of what is left in his wake:

“This is LeBron’s hometown team where he spent most of his career and won a championship with,” Windler told Forbes. “He left a huge part of his legacy with this franchise and knowing that you get to be a little part of that is pretty cool.”

It’s not clear how newly-appointed head coach John Beilein plans to utilize Windler in his rookie season. He could see a fair amount of playing time, though, as he’s one of three small forwards listed on the Cavs’ roster. Either way, Windler says he’ll be ready to contribute in any way he can:

“I’ll do everything I can every night to get better and do the things I can to contribute to the team,” Windler said during his interview with Forbes. 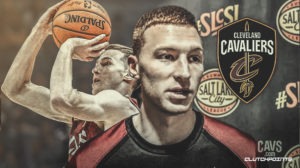