Given all the greatness that he continues to show whenever he plays on the court, not a lot of players can be compared to how good LeBron James is. He is widely considered as one of the best, if not the best basketball player in the world today, who a lot look up to.

However, Dwyane Wade recently said that he thinks a young and rising star in the league is “definitely” like the Cleveland Cavaliers star forward.

With the Cavs playing against the Philadelphia 76ers Monday, Wade only had good words to say about Ben Simmons. The veteran shooting guard even admitted that he already sees similarities in Simmons’ game and James’ and also cited, via Chris Fedor of Cleveland.com, that his stat line through 18 games, are signs that he can become like the Cavs superstar in the future.

“No one knew exactly how he was going to perform, we just knew he had talent,” Wade said.. “He said he felt like he could play better, but if you look at his numbers he’s averaging almost 19 a game with nine rebounds and seven assists. That’s incredible for a guy who hasn’t played basketball in over a year. He’s definitely figured out what works for him and he’s sticking to it. He’s not getting into the 3-ball game that everybody’s getting into, he’s playing his game. He’s definitely a matchup problem and a challenge for most teams.”

“Yeah, look at the stat line. A guy that does multiple things on the floor. A big guard, exciting. So definitely (see similarities).”

Dwyane Wade’s comments definitely say a lot about how impressive Ben Simmons has been so far this season. The Sixers rookie has been a revelation as he continues to prove that he was worth the wait after missing the entirety of last year due to a foot injury. The 21-year-old LSU product has been averaging solid numbers of 18.5 points, 9.1 rebounds, 7.7 assists, and 2.1 steals in 35.1 minutes per game.

If Ben Simmons can sustain this level of play as the season progresses, it won’t come as a surprise if he will receive more comparisons to LeBron James for his brilliant all-around game. 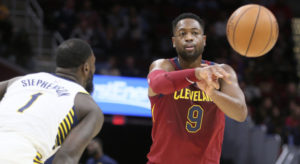