The Cleveland Cavaliers and Golden State Warriors are locked into a heated matchup in Game 3 of the 2018 NBA Finals tonight, and both teams didn’t wait to get things testy. In the first quarter, forwards Tristan Thompson and Draymond Green got into a couple of minor exchanges, and it resulted in double-technical fouls on the two players. That means the next technical foul for either player would mean an automatic ejection.

A couple of plays later, Draymond Green was caught reaching in on a Tristan Thompson dribble attempt, and was whistled for a call. He immediately imploded and started screaming on his way to half court before turning back towards the free throw line and saying “That’s bulls**t.”

Hey @OfficialNBARefs, since you're live-tweeting, I need an explanation as to why this isn't a technical foul on Draymond Green. Thanks in advance! #Cavs #Warriors pic.twitter.com/L4Nc1dlVSM

ESPN broadcaster Jeff Van Gundy said immediately after the double technical that Green would probably not be given another tech until late in the game if it was already out of hand. Funny enough, that little reaction from Green happened.

The Cavs currently lead the Warriors at the half, 58-52. 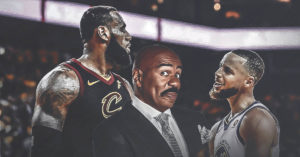