The Golden State Warriors won the 2018 NBA Finals in a clean sweep, eliminating the Cleveland Cavaliers and sending them into a summer of uncertainty with LeBron James’ free agency coming up.

During the parade, stars like Stephen Curry, Kevin Durant, and Klay Thompson had fun moments with the crowd while guys like Nick Young and Jordan Bell both went shirtless and celebrated with alcohol. Towards the end of the parade was Draymond Green’s bus, and he got up to speak with members of NBC Sports Bay Area at a little podium by the parade rout.

At the end of his interview, Draymond Green took a jab at Cavs big man Tristan Thompson, saying that he refused to shake his hand after Game 4 and said that, ‘they weren’t cut from the same cloth.’

"We just cut from a different cloth." – @Money23Green #DubNation pic.twitter.com/A1RoUGuceN

Green might be referencing a little bit of bad blood that spilled over in the overtime session of Game 1 of the NBA Finals, where Thompson pushed the basketball in Green’s face during a heated confrontation.

Tristan Thompson shoves Draymond Green after getting ejected…tells him to meet him after the game pic.twitter.com/zUIRnaZuGr

In any case, the overpowered Warriors are NBA Champions and the Cavs have to figure out what LeBron James wants to do before they proceed with their offseason. 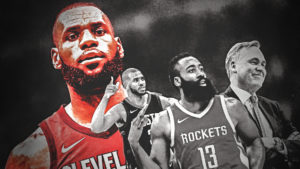